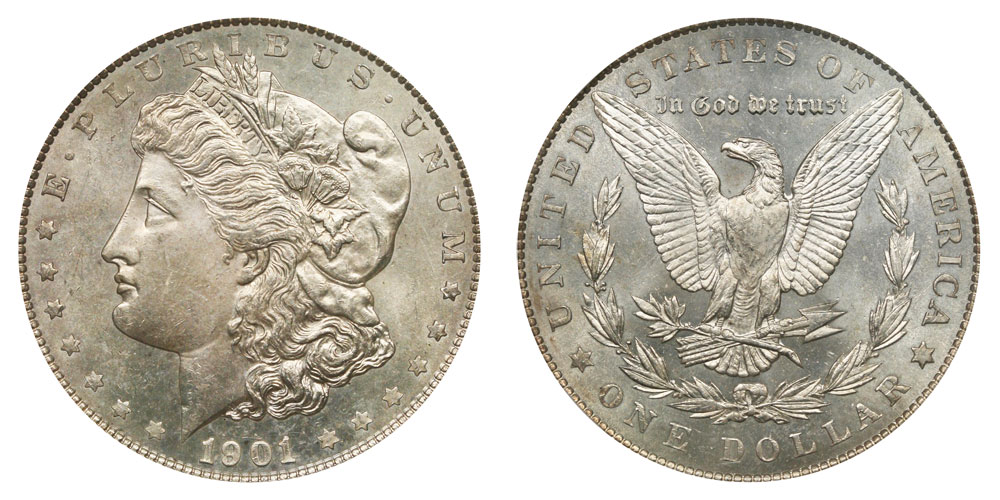 The Philadelphia Mint struck 6.9 million Morgan dollars in 1901. A number were released into circulation soon afterwards. PCGS estimates that about 10% of the 6.9 million total mintage survive in all grades today.

No 1901s were apparently released in the great Morgan dollar Treasury disbursements of the 1950s and 1960s, leading numismatists to assume that nearly the entire mintage was melted down in 1918 under the Pittman Act. Seeing as how the bags of Mint State 1901s would be sitting at the front of the Treasury vaults, this is a logical assumption.

The 1901 Morgan dollar seems like nothing special, when looking at the mintage of over 6.9 million coins. In circulated grades, it carries a modest premium. But in uncirculated condition, the 1901 Morgan dollar is the rarest of all Philadelphia business strikes, except for the 1895 Morgan, which has no surviving non-proof coins at all. This makes the 1901 one of the great Mint State rarities in the entire history of the Morgan dollar. With nearly no Mint State 1901 Morgan dollars (less than 200 are believed at MS63 and above), Almost Uncirculated examples are sometimes used as "stand-ins".

Unfortunately, most 1901 Morgan dollars have a soft strike that is more often associated with mintages from New Orleans. Some of the higher grade coins still extant do exhibit a sharper strike with more mint luster.

There have been no MS65 1901 Morgan dollars appear at auction in ten years. The sole surviving MS66 (PCGS) coin holds the world auction record for a 1901 Morgan, selling for $587,500 in the October 2015 Legends auction of the Coronet Collection.

Because of the extreme rarity of 1901 Morgans in Mint State, frauds and counterfeits abound. Beware of 1901-O or 1901-S Morgan dollars that have had their mint mark filed off, so to pass them off as a 1901 from the Philadelphia Mint. Experts strongly urge collectors looking at 1901 Morgans in AU condition or above to only purchase coins authenticated, graded, and slabbed by one of the major third-party grading services.