The Buffalo nickel is one of the most popular U.S. coins.

Officially called the Indian Head nickel, the Buffalo nickel was designed by famous sculptor James Earle Fraser. Fraser spent his childhood on the frontier, where he saw the bison wiped out and native Lakota tribes forcibly relocated.

One of Fraser's most famous sculptures is "The End of the Trail." He sculpted the first version of the statue in 1893, when he was 15 years old. His wind-blown, forlorn warrior and pony symbolize the destruction of the American Indian way of life. 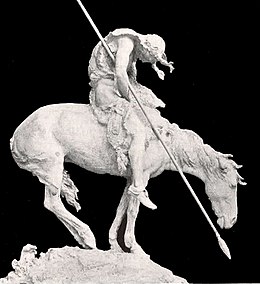 "The End of the Trail" by James Earle Fraser. Image: Wikimedia Commons

James Earle Fraser had two connections to Custer's Last Stand. His father helped retrieve the remains of many 7th Cavalry troopers at Little Big Horn in 1877, when James was an infant.

35 years later, James used Cheyenne Chief Two Moons as one of the models for the Buffalo Nickel. As a war chief, Two Moons fought in the battle of Little Big Horn.

The Most American U.S. Coin

The Buffalo nickel was introduced in 1913, continuing the policy of improving the designs of the nation's coinage. It was produced until 1938, when it was replaced by the Jefferson nickel. Even so, the Buffalo nickel circulated until the 1960s.

Fraser was quoted as saying “my first objective was to produce a coin which was truly American, and that could not be confused with the currency of any other country. I made sure, therefore, to use none of the attributes that other nations had used in the past. And, in my search for symbols, I found no motif within the boundaries of the United States so distinctive as the American buffalo.”

The Face on the Buffalo Nickel

Fraser used three models in creating the Indian on the Buffalo nickel:

*Many Lakota consider "Sioux" a slur. The term comes from the name they were called by their historical enemies, the Ojibwe (Chippewa).

Fraser's design intentionally did not represent a particular person. Most artists of the era purposefully “anonymized” allegorical figures. This led to many people who resembled the image to claim to be "the Indian on the Buffalo nickel." Some made a living from their celebrity, selling photographs and making public appearances.

Iron Tail's real claim to fame was as best friend and star performer in Buffalo Bill's Wild West show in the 1880s. He became world famous, touring in the U.S. and Europe and meeting world leaders.

The Bison on the Buffalo Nickel

James Fraser had seen buffalo in the wild as a boy, but they had been wiped out long before he began his design for the Buffalo nickel. Less than 300 purebred American bison were alive in an 1890 survey. Instead, Fraser relied on his memory, photos, and a particularly large New York City buffalo named Black Diamond.

Many years later, Fraser was asked about his Buffalo nickel design. He noted, "He was not a plains buffalo, but none other than Black Diamond, the contrariest animal in the Bronx Park. I stood for hours watching and catching his form and mood in plastic clay. Black Diamond was less conscious of the honor being conferred on him than of the annoyance which he suffered from insistent gazing upon him. He refused point blank to permit me to get side views of him, and stubbornly showed his front face most of the time."

Fraser had an assistant move to the side and get the bison's attention, so that he could finish his reference model.

Fraser's story created confusion, and birthed a mystery. Black Diamond had previously been identified as the model for the bison on the Buffalo nickel. But now, Fraser's mention of the Bronx Zoo as the location of his model cast doubt on that.

Points in favor of Black Diamond are that the Central Park Zoo was closer to Fraser's studio, and that Black Diamond was billed as the largest bison in captivity. Numismatic historian Roger W Burdette researched the subject of the bison's identity. He concluded that Fraser simply confused the two zoos. The Bronx Zoo was by far the most famous of the zoos.

Another reason to believe that Black Diamond was the bison on the Buffalo nickel was provided by the director of the Bronx Zoo! He described the image of the bison on the nickel as "a sad failure with its head drooped as if it had lost all hope in the world." This is not something he would say to describe the alpha male bison in his own zoo.

Taken together, the information points to Black Diamond being the model for the reverse of the Buffalo nickel. The difference in horn placement can be attributed to Fraser changing them during the design phase. After all, the image wasn't supposed to be specifically of Black Diamond. It was meant to be the archetype of the Plains Buffalo.

The public usually hoarded the first year of a new coin design. The Buffalo nickel was no different. When rumors started circulating that the government would recall all the Type 1 Buffalo nickels in favor of the Type 2, millions more were saved. Of course, this never occurred. It did help to preserve a large number of uncirculated and lightly worn Type 1 Buffalo nickels.

The 1913-D Type 1 Buffalo nickel is usually recommended for the type collector. It generally has better strikes than the nickels from Philadelphia and San Francisco. The Philadelphia mintage is notable for eroded dies and frequent die clashes. The San Francisco issue has the weak strikes that were common from this mint in the early 20th century.

Chief Engraver Charles Barber complained to his superiors about the Buffalo nickel design soon after production began. He reported that the Mints were chewing through Buffalo nickel coin dies at an alarming rate. Not only that, the FIVE CENTS below the buffalo was wearing away once the coins went into circulation. The denomination sat on top of raised ground that the buffalo stood on, making it the highest part of the coin.

Permission was given to remove the raised mound and recess the denomination. Barber, never one to give up an opportunity to mess with a rival's design, also smoothed away details on the buffalo and the Indian's hair. He claimed his alterations would allow the coins to strike better and extend die life. In the end, they did neither.

It is a mystery why Barber did not fix the raised date on the obverse of the coin at the same time. Worn and partial dates remained a problem with Buffalo nickels for their entire run.

Opinions can differ on what is a semi-key Buffalo nickel date. The chart below lists the most commonly listed semi-key dates. Note that we do not include conditional rarities in this list.

There are no rare Philadelphia mintages, though some dates are rare in higher Mint States.

This list covers all known Buffalo nickel errors recognized by major third-party coin grading services. Note that NGC does not recognize the 1926-D and 1927-D "Three and a half legs" errors as varieties.

One of the most famous uses for old Buffalo nickels is making Hobo Nickels. The first hobo nickels were carved by hobos as they traveled from town to town, looking for work. Hobo nickels were carved using scraps and crude tools. The most popular theme was turning the Indian into a man wearing a bowler hat. The names of only a few of these original hobo nickel carvers are known.

Professional artists continue the idea of hobo nickel carving. These modern carved nickels can exhibit incredibly fine detail. Some artists have moved on to dollar or half dollar coins. These coins usually show nothing of their original design, but simply provide a metal canvas for the artist.

Do you know the difference between a hobo, a tramp, and a bum?

A hobo was someone who traveled from town to town to find work. When odd jobs played out in one town, he would travel to the next, often hitching rides on empty railroad cars. A hobo might be called a migrant worker today.

A tramp (or vagrant) was a homeless person who traveled from town to town, usually on foot. This traveling to another town was usually at the insistence of the local police. The tramp didn't actively seek work, but would take temporary jobs when he ran out of money. He preferred to get by panhandling and petty thievery.

A bum was a homeless beggar who didn't travel at all. Today, the term is seen as a pejorative referring to a homeless person.

In short, a hobo wanted to work; a tramp worked if he had to; and a bum avoided work altogether.

You can learn more about the history of the Hobo nickels on the Gainesville Coins Blog.

Note that there were no Buffalo nickels minted in 1922, 1932, or 1933. When a grade appears in parentheses in the MS65 column, that is the finest grade known. There are no nickels graded MS65 for that date.

* Included in above mintage